The 2020 One Page Dungeon Contest wrapped up on the 15th of July, and I’ve entered this year (for the first time since 2015). I don’t think my dungeon has much of a chance - it’s a bit the esoteric work/aesthetic design testbed and lacks the artistic attention traditionally necessary to win the contest … but … the goal isn’t to win, it’s to produce a tiny, but usable TTRPG adventure and to learn about what that entails. I encourage everyone who has any inclination for adventure design to enter next year or at least try to construct a one page dungeon and hone it to a standard that someone else could run it from. The lessons in creating such a small, focused adventure teaches are useful more generally, and in the end you hopefully have something to share that shows how you like to play TTRPGs -- which at their best are a creative pastime.

One Page Dungeons are a form of adventure publication that is literally what it says in the name. One, one-sided, 8.5” x 11”/A4 piece of paper with a complete adventure on it. How one wants to do that is the interesting part. Sure it’s a gimmick, but it’s a fascinating one because the highly restricted space encourages a lot of design compromise that ultimately makes the designer decide what has to cut and what the most space saving way to communicate is. There’s practical and aesthetic considerations as well - which likely appeal to the more artistically and design inclined, but for the adventure designer the One Page Dungeon (OPD) is an experiment in cutting away the unnecessary and emphasizing the most important elements of a chosen playstyle and preferred design goals.

ONE PAGE DUNGEON MAXIMS
Below I’ll explain in more detail, but here is a list of steps and considerations that go into a One Page Dungeon, or at least a specific type of One Page Dungeon -- the keyed location based kind with as much classic exploration feel as possible: 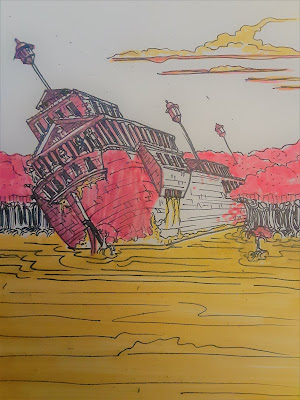 VESSELS OF THE PLAGUE FLEET
The Capital Fleet of the Successor Empire, once a thousand stone ships, depleted and weakened by mutiny, war, neglect, disaster and finally broken in the war of Maratime Schism by magical plague. Trapped in the estuary of the Green Flow, the towering stone hexareme and octeres - each a floating castle topped in towers and fortresses mired in mud. The smaller trihemioliai and quinquereme, baking on the hot sea, crews skeletonized by disease. Beyond the pickets of the Schismatics, and the units of the mutinied units of the Expeditionary Fleets. Lingering, crews and marines bloated and raved under the Pyre Sea sun until the surviving captains met, pooling their healthy sailors, manned an escape squadron, headed by the bombardment enneres Implacable, and sailed out to battle the mutineers in a long pursuit back to Aurum Ferro. The fleet that remained died at the hands of its sickly crews. Seacocks opened, weapons spiked, the dying crews denied their vessels to their enemies: sinking with them or driving them ashore.

Three easily explored vessels are included here and are the most complete and well preserved of the Plague Fleet, fixed fast in its mud and the dense mangroves that have grown outward as the Green Flow dumps tons of rich sediment into the Morass each year.

The Hemolina Cruelty, a lighter vessel, a sharp prowed raider driven into the shore, its trapped treasure holds still containing plunder from a raid on the Sapphire Islands of the Maratime Provence. Currently the renegade revolutionaries, the Lost Lambs scavenge its stern in search of volatile arcane munitions to aid their insurrectionist violence.

The Quadireme Risen Empire, a siege ship, rebuilt from the razee of the burnt octeres One Thousand Wisdoms, now mired deep in the mangrove, its overgrown bombard decks home to the court of the Ape King and its holds a submerged ghost grave.

The Hexareme Red Queen rests in the shallows, a stately dreadnought, trapped in time. Aboard the forces of its former ship’s daemon stalks the decks, animating the vessel’s figurehead, locked in an endless battle with the soul of the sorcerer king once bound to its power plant.

Perhaps 30 other vessels are lost in the Green Morass and the waters around it, most entirely submerged or buried in silts. Others are capsized, choked with mangrove, or burnt shells, emptied of accessible valuables by time and the elements. These other wrecks can be expanded on by an ambitious GM (Appendix A includes some tables and ideas on how to do so) but the Cruelty, Risen Empire and Red Queen represent both many sessions of exploration and the central puzzle of the Plague fleet, so it’s unlikely a party in an open world game will want to explore them all.