GAZING BACKWARDS INTO THE ABYSS 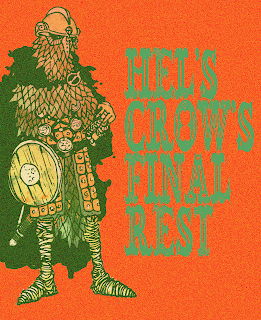 In the dingy fall of 2012, a little over nine years ago now, when I had newly returned to Classic style RPG play and the online community around it seemed full of possibility I wrote Hel's Crow's Final Rest.  The blog Ramblings of the Great Khan had put together a little contest for short viking themed adventure, and this was my two page entry.

An RPG friend of mine, mv, has been working on improving their layout skills and asked around for short things in search of layout. I offered a few old adventures and mv picked Hel's Crow's Final Rest. Over the past several days mv and I have gone back and forth about layout and I drew some new art for the old adventure to offer it up again in a more contemporary form.

It's interesting looking back at one's own old work. A glimpse into a different time, and 2012 was a different time.  The "OSR" was a younger school of RPG design, having just emerged on Google Plus and started to merge its Revival and Renaissance into a shared conception of play. My experience with post 1995 gaming was largely limited to running Patrick Wetmore's Anomolous Subsurface Environment and playing a few of the early online games on Google Plus. Rule sets hadn't proliferated and Labyrinth Lord was the primary retro-clone. The term "OSR" wasn't even in general use and many of the personalities that would come to dominate the scene and innovate within it hadn't started blogging.  Yet in 2012 there was already a robust culture of play exploring rules light older editions of a variety of games (not just Dungeons & Dragons) and a community of creators focused on setting design, adventure creation and rules hacking shared via blog, but not yet the production of new derivative systems for sale. Hel's Crow's Final Rest is a product of this time of vigorous amateur adventure design.  It's a simple location/situation based advetnure, but strikes me still as fairly representative of the sort of small adventure in 2012 - a little compressed to fit into its original two pages, but very much an example of mid-period "OSR" design.

At its core Hel's Crow's Final Rest is a faction based negotiation built around a single encounter.  Again this is because it's not a dungeon crawl, but a short adventure. One could argue it's scene based even, but it's still designed with a location as its subject - the Sea Shrine of Aski.  My adventure designs remain focused on location, even today, and like Hel's Crow's Final Rest try to derive much of their play from faction negotiation. This necessitates unclear moral lines (which Hel's Crow has - though it has obviously good and obviously evil factions) so that there's no obvious best choice for players. Here the players are asked by a powerful evil force to recover an artifact from the shrine sheltering refugees from Aski, and can do that through trickery/negotiation or through violence.  Heroism and direct confrontation with evil in the adventure leads only to a quick and messy death, while monetary success (and thus level advancement) is far more likely to come through the characters decision to engage in evil acts themselves.

The cartoonish Norse setting reflects the grim character of this quandary - but I think manages to do so without fully embracing the "Grimdark" sensibilities that would later become an OSR hallmark.  Such dark themes and lack of clear "good" choices are a useful tool for designing with high lethality systems, producing adventures that have a high degree of player choice and moral ambiguity/decision. Such settings set player expectations by cautioning them that characters can die easily and that survival depends on making choices and problem solving.  An alternative of course has always existed in "Gonzo" settings which use absurdist humor to similar effect, and in 2012 the question of which style of setting Gonzo or Grimdark would dominate future OSR design was still an open question.

TREASURE TROUBLE
One aspect of Dungeon Crawl play that All Dead Generations hasn’t covered in any detail is treasure. This is an oversight, because treasure, like exploration, like encounters, and like combat is an important element of fantasy RPGs and especially important to the older style of play that All Dead Generations discusses. When we consider how treasure works in fantasy RPGs it usually seems fairly simple, even in Classic games - pick up the treasure and bring it back to civilization for experience and leveling. It is this simple, this is the gist of treasure in Classic fantasy RPGs -- pure reward ... but like everything else in the interconnected edifice of Classic play treasure presents its own complexities that interact with various important procedures and mechanics. Unfortunately the way treasure is structured in most classic systems makes it less of a reward and more of a chore, eating up play time with logistics and calculation.

The Function of Treasure
First, recovered treasure is the Classic player’s metric of success. Even in Classic rule sets that provide experience for defeating or killing monsters (something I dislike as it sends confusing messages about the goals of exploration), the majority of characters’ experience will come from the treasure recovered in the dungeon. Random treasure generation has been a mainstay of Referee preparation since the first edition of Dungeons & Dragons however, and it has an enduring appeal because imagining treasure is delightful - it’s a space where wonder can enter RPGs, this alone makes it valuable. Yet, these formative random treasure systems, as found in all early Dungeons & Dragons, reject wonder. Despite the gambling style fun of rolling up random hoards, random treasure has been largely unvariegated mass of coinage.

There are mechanical reasons for these coin hoards, coins are far easier to generate randomly and far easier to track encumbrance for. Dungeons & Dragons has also long used coin based encumbrance, with characters able to carry a few thousand coin weight (it varies by edition and represents a failure point for early dungeon crawl mechanics - see below). This ease couples well with the gambling appeal of random treasure generation, and the random “treasure types” that appeared in the 1970’s white box have endured appeal, despite most older editions cautioning against coin hoards for various reasons. However, even when a designer or referee doesn’t use random generation or design advice cautions against it the treasure tables set the standard and expectation of what treasure looks like in Dungeons & Dragons, and from there fantasy adventure as a genre.

More influentially random treasure generation in early editions of Dungeons & Dragons provide guidance about the expected speed of character advancement. For example, if the party defeats a dragon in 1981 Basic D&D and takes its hoard they will find the glorious Treasure Type H, worth an average of 50,000 GP. This of course isn’t really a linear challenge system as even the relatively weak six Hit Die White Dragon has such a hoard, while the much more dangerous saber tooth tiger (big cats are absolute terror beasts in Basic) they will get only a few hundred gold from its paltry Treasure Type V (or more likely nothing - the chances of having even d100 GP is 10%). Still, Treasure Types and random coin hoards are the main way that early editions offer referees and home designers a means of visualizing the rewards of successful adventuring and so provides clear metrics for pacing and level advancement.

Yet, treasure should be more than coins. Coins are a simple game currency that characters can exchange on a 1 of 1 basis for experience points, but “treasure” is, like fantastic locations and strange creatures, a concept that offers up the excitement of fantasy. Yet I won’t suggest abandoning random treasure generation in favor of inventing unique treasure caches as part of adventure preparation, perhaps lovingly describing each valuable object after reviewing the online collection of the British Museum for inspiration. This is time consuming fun, but it neglects an important element that makes coin hoards useful -- coin hoards work perfectly with early Dungeons & Dragons coin based encumbrance system to create complications and allow players to make informed judgments about the relative value of specific treasures.

The coin system is still of course dull, but it need not be as it’s easy to expand and cover a wider variety of treasure with minimal change, once one recognizes its mechanical basis and if one is willing to set aside some of the implied setting it creates.