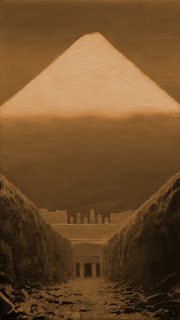 This blog is largely devoted to repeating a single message about game design, hammering away at the same subjects for what I hope is a growing audience. At times it feels repetitive and foolish, but then when one looks out into the larger Roleplaying Game community there’s still a lot of confusion about these same subjects -- the “Dungeon Crawl” style of play.

So once again what is a Dungeon Crawl? Why might some adventures or play styles that call themselves Dungeon Crawls fail to deliver on the promise of the genre? To explore this topic I’ll discuss a design exercise/theory and adventure format popular in the Contemporary Traditional community, the “Five Room Dungeon”. To some extent this distinction is one of definition, but I think it’s a useful distinction as it will hopefully introduce some players to the Classic style of play or at least provide tools to think about the differences between play styles and examine what sort of experience one’s table provides.

The Contemporary Traditional community has its own ethos of play, values, design principles, preferred mechanics and of course play style, and my goal isn’t to pass judgment on them, denigrate, or otherwise offend. Rather I want to present some reasons why designing and playing following the Five Room Dungeon format may not feel much like dungeon exploration and why it doesn’t fit within the (or my) definition of a Dungeon Crawl derived from or following the Classic play style found in such adventures as Caverns of Thracia.

This is all certainly not to say that Five Room Dungeons are bad or don’t work for the play style that they are designed for, only that they aren’t a panacea for adventure design or a great place to start when learning about Classic play or the Dungeon Crawl. To help understand why, it’s necessary to describe what goes into a Dungeon Crawl, or perhaps a “Crawl” more generally, as the Dungeon Crawl shares key elements with wilderness adventure designed as Point, Hex, or Wave Crawls. The basic structure of the Crawl style adventure contains three elements: Space, Exploration and Procedure.

Crawling Into the Past 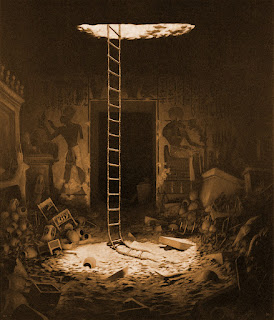 What does the Dungeon Crawl promise? To some it’s a label for any adventure set in an underground maze or even any fantasy adventure regardless of design and mechanics. To me and as used here, the Dungeon Crawl label implies something more: an adventure in a complex environment filled with danger: traps, monsters, secrets and mysteries -- something beyond just combat or NPC interactions where the location and environment is an important character in the game. Focusing more narrowly, the simplest definition I have for a Crawl as a set of design principles is to say that it’s a play style or adventure where the locus of play is:

A fantastical SPACE that is EXPLORED PROCEDURALLY.

I’ll be looking at each of these elements a bit individually, and they may already be familiar to regular readers of All Dead Generations, but I’ll only be discussing the definitions and how the elements work holistically rather than the details of their history or supporting mechanics.