Below is the first play report for my current home campaign, a playtest of Tombrobbers of the Crystal Frontier, which I'm also working on for publication.  So far I've played five sessions, the first four within the initial location "Murkvey's Rock" - a starter adventure for the setting.

WELCOME TO THE CRYSTAL FRONTIER

Manny had been a ruffian, one of the big, tough bums that pushes the weak face first into Aurum Ferro's fecund gutters until they give up their green glass bottle of grog or the pennies they'd begged. Sorcha a run away villiene from the Solar Papacy, her horse sold, armor filthy and pockets empty, but still swaggering bow legged and proud. Tiny a hedge warlock from some nameless village, Feather, an exiled Priestess of some jungle bird good, blue skinned and lamp eyed. Coldway had been born to wealth, a fop still, but also, like the rest she was another destitute last chancer, gems pried from the guard of a battered rapier, and white crocodile leather breeches filthy.

A last chance to die or be redeemed on the Crystal Frontier. Adipose Mab, a thin, dusty knife of a women: scholar, surgeon, torturer, antiquarian and tomb robber had offered them and twelve other wine soaked gutter leavings a future. Act as scouts and plunders, or bait Coldway said, in the exploration of one of the Sky Tombs that fell across the mountains and get set up for a new life. The terms were generous: passage out of the Empire and over the Maiden Tombs in Mab's mule train, a purse of coin and a set of Tombrobber's equipment. If they did a good job, Mab might keep them on for a percentage or hand over information about a crystal or two they could crack and loot on their own. It was a dangerous deal, but a lot better than any other offers Manny, Sorcha, Tiny, Feather or Coldway could expect.

At the edge of the towering mountains, arrested by the vista, the mules halted: Mab, her bodyguards, Kotto and Karo, her 'gemcutter' Flash, the Aurum Ferro exiles and 12 other wretched fools. Below to the South lay the Frontier, behind the friable, wind-tortured peaks and beyond the resurgent Bull Kingdom, once and Imperial dependency, now the personal demesne of the Warlock King. The Frontier was excessive -- stark but the sandy land erupting with fierce color: oranges,reds,chartreuse and magenta spattered and strung across dune, badland and hill. The painted land sectioned by the thin white lines of the crumbling Imperial highway and a meandering reflective river, Rio Ahogo.

Still far above, the band would not reach the plain until the next morning, camping at the edge of the hills sheltered in the ruins of a fallen villa, overgrown in dead tangled vine -- a monumental bonewhite wall, cabled in late Imperial false pillars and sweeping sinuous arches to block the night winds. As the brush fed fire burned low o half buried mosaic depicting a red, fire winged woman slaughtering legions, Feather watched the sky blazing with meteors - streaks of pink and blue plummeting towards the Frontier. Mab claimed they were the crystal ships, coffins and fortresses of Empryean people, falling through a single aperture in the spheres that held the moon and planet, to strike this one region. Feather wasn't sure she believed the greasy haired scholar but the colors and vast expanse reminded her that she was far from the tangled indigo depth of her home.
---

Two days later they were camped at the edge of a crumpling crater, floor growing waist high with prickly pear, and shadowed rim teeming with yellow lichen, red ice plant and tiny flowering succulents. At the center a cluster of pink crystal prisms, towering 30' or more from the dust -- a formation mostly buried by impact. Mab and Flash walked the crater floor, pointing at crystals and talking animatedly. Some of the newly hired scouts began to check the straps on their armor, readying themselves to delve whatever lay beneath the crystal spires, but Kotto, the more friendly of the Iceheller bodyguards, discouraged them, saying it would be hours before Flash faceted an entrance. Better to find some shade and wait.

The old gemcutter soon got to work, pulling lens, prisms and tuning rods from his case, tapping, shining light, examining the crystal and tapping again for hours before he started in with his hammers and pitons. It wasn't until the noon beans were boiling steadily that Flash's work produced cracking sounds from the crater, and sparkling slabs of crystal started to fall away from the spires. By mid-afternoon there was a gap deep tall enough to step through in the side of one high hexagonal prism, revealing a hollow interior. Mab cautioned against the cut crystal's poison dust and usher the five forward.

A Note on Deceptive NPCs and More Crystal Frontier

December has been a productive month, though projects keep moving off sideways rather then plodding on properly to their finish. I’ve put out a second ‘Mini-Adventure’ for Tombrobbers of the Crystal Frontier, while the original project still needs some art, layout and editing to finalize.

At 1900 words, this second Crystal Frontier adventure isn’t quite a One Page Dungeon, but it’s only eight keyed locations, a lair, and it certainly lacks all the elements of a full scale dungeon adventure. Most importantly there are no random encounters or other mechanisms that put time pressure on the party. Instead it revolves around negotiation with two NPCs: an untrustworthy exiled sorcerer and the undead, demon tainted assassin that hunts him on behalf of a powerful, but distant regional faction: The Warlock King. The Brujia, The Beast and The Barrow is less of a single one session adventure (though it’s also that, and I think it contains a couple of interesting puzzles) and more of an introduction to one possible source of intrigue and a useful NPC who can remove curses(curses and magical disease are a prominent feature in the setting).

The adventure itself is something I’m happy with, the layout and art are properly brooding while maintaining the colorful, slightly psychedelic look that I’ve picked as the overall visual theme for Crystal Frontier. The keys are short and while the barrow isn’t expansive, it holds a few puzzle style traps and dungeon furniture that tells a simple story about if the players want to seek it out. 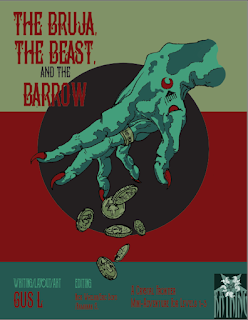 It’s available as a PDF here on DriveThru RPG.

I’m currently at work on another of these mini-adventures, though this one is 14 keyed locations and revolves around a dangerous “hunting monster” that stalks the characters as they search the location for treasure. It’s an interesting variation on the dungeon crawl, a style of threat that’s hard to do well but seems like it should offer possibilities -- I’ll see how well I can manage it. “Broken Bastion” should be out next month, also as a $1 PDF on DriveThru.

Maunderings about play style, 5E, and theory follow. They are entirely absent from The Brujia, The Beast and The Barrow.