So You Want to Build a Dungeon? 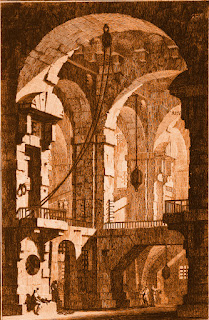 You want to write a dungeon adventure for a classic style roleplaying game, and you want it to be good. How does that work?

What exactly does a “dungeon” imply and what is it as a game tool?

A dungeon is a specific kind of adventure, one that has its own form and which requires certain elements to be successful. More, a dungeon is a “location based adventure”—an adventure that will involve the exploration of a fictional space room by room. It’s certainly not the only kind of roleplaying adventure, but it’s the primary kind for a particular exploration, navigation and problem solving style of play that is both the oldest and still a compelling one. A dungeon must be a fantastical location, but it need not be an underground maze or cave system: buildings, shipwrecks, space stations, castles, formal gardens or the corpses of an enormous beast all make fine dungeons.

What is necessary for a dungeon adventure is to create a bounded fantastical space, “Rooms”, linked together in some order that the players can freely navigate: backtracking, turning, and determining routes. Within these Rooms the designer places obstacles and rewards. Traditionally this means a series set of stone corridors and chambers filled with monsters, treasures and traps. However, neither the aesthetic of the space or the nature of the inhabitants, valuables and challenges within are fixed elements of design, and reinterpreting the dungeon space can make for a novel and exciting adventure.

Likely when you decided to write an adventure you already had a story in mind, and that’s good, but since location based adventure is about the players’ decisions, that story will recede into the background. Given freedom to scheme and explore, players are as inventive and truculent as a proverbial herd of cats, and trying to force or trick them into telling a specific story is about as successful as ring-mastering a cat circus. Rather than a story, consider your ideas a “Theme”, one that will inform the “Ecology” and a “Layout” or map that together define the dungeon adventure. Putting a plot to it is likely to fail when the players, unaware of the plot, follow their own interests.This is the joy and burden of location based classic dungeon crawling, that its story has to evolve from player decision.

The most dangerous part of a designer’s story is a climax or ending because it’s very hard to include one without making dangerous compromises to the dungeon adventure form. Narrative beats make assumptions about how the characters within a story will act, and become very difficult to maintain when those characters’ decisions are being made by someone other than the author. Players decision making is unlikely to bind itself to even as simple a narrative structure: incident, rising action, climax, falling action and resolution. The players may decide that they wish to avoid the climax’s confrontation by siding with the antagonist or they may simply turn away from the rising action as they become distracted or the risk seems too high and the rewards uninteresting. Instead the dungeon designer is best building only the space for a story to unfold, and relying on the players to determine the narrative within that story.